DIRTY HARRY (1971) brought us the brutal debut. Clint Eastwood gained his most iconic role as Inspector Dirty Harry Callahan.  He gave back big time with the infinitely quotable “This is a 44 Magnum…” monologue. Its closing “Do you feel lucky? lie let audiences know this cop was no square.

MAGNUM FORCE (1973)  upped the ante on for magnum mayhem by pitting Callahan against a sleeper cell of vigilante cops within Harry’s own department. Along with green screen-free moving vehicle action, it’s a treasure trove of quotes.  “A man’s got to know his limitations” is a classic.

As THE ENFORCER (1976) Callahan faces off against two foes. First Harry has to handle a band of terrorists with a deadly agenda committing crimes across the city. If that’s not enough, Affirmative Action teams Callahan with his first female partner.

SUDDEN IMPACT (1983) A franchise first, Eastwood took on directing duties (and 60% of the profits)  and fans thirsty for Callahan’s brand of shoot-first justice made this entry the most lucrative of the series. The line “Go ahead, make my day” ignited the 80’s catchphrase craze. 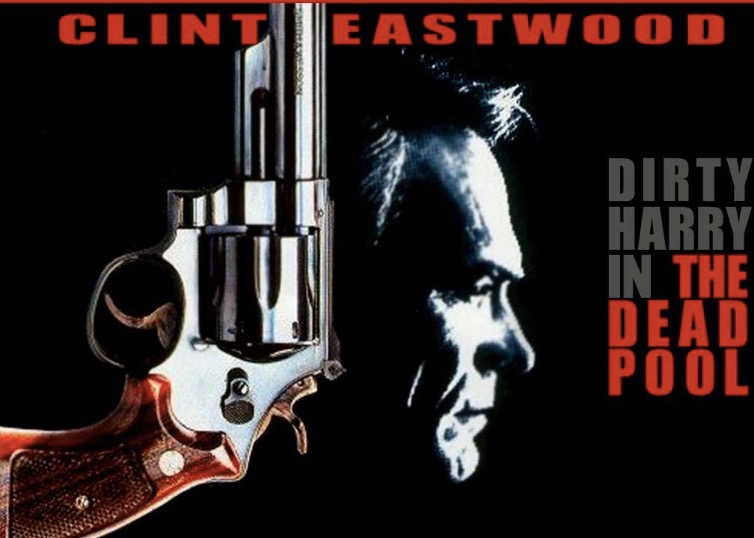 And then we got The Dead Pool (1986), the shortest of the series and also the least profitable, no doubt due to its Grade-A lame plot involving a game betting on celebrity death. While investigating the most recent demise, Callahan learns his name has made the “dead pool” list. Don’t get me started on the “chased by a radio controlled toy car” sequence.

The most memorable moment doesn’t even belong to Eastwood. That goes to future detective Jim Carrey as the drug addled rock star with the least sounding rock star name – Johnny Squares – lip synching to Guns & Roses hit Welcome To The Jungle.

There sure as shit isn’t a Dirty Harry fan on the planet satisfied with how their favorite franchise is left floating face down in The Dead Pool. The lackluster reception must’ve been enough to convince Clint to hang up Harry’s .44 Magnum. Now we’re faced forever with this piss poor finale for the greatest law enforcement action character in the history of movies. For that crime, outside this article, The Dead Pool is dead to me.

THE TROUBLE WITH HARRY

It’s been nearly two decades since we last saw Harry. There’s no getting around the fact Eastwood is up there in years.  Sure, at 88 years-old, he’s technically past retirement regulations, but who says Callahan has to be the same age as Eastwood? Nobody, that’s who. Thanks to technology that will eventually rise up and enslave humanity, we can use movie magic to have Clint playing 10 to 15 years younger. Facing those options, I’ll take an Oscar winning VFX enhanced Callahan over none at all.

Don’t get the wrong idea, hombres. The VFX used to de-age Clint won’t go to suddenly make him parkour across San Francisco rooftops in pursuit of a suspect. Matter of fact, Callahan’s Magnum Force mantra, “A man’s got to know his limitations” returns to haunt Harry. What does that mean? It means don’t expect some CGI Callahan clinging to the hood of a speeding Cadillac while a gangster tries shaking him loose.

A GOOD DAY TO SIDEBAR

Perhaps to make up for the nose-dive of Die Hard 5, 20th Century Fox is already fleet of foot on the next installment. It’s unknown if they’ll be using the plot, but producers have a title borrowed from a comic book – whoops, ‘scuse me, graphic novel. We can only assume this means they’ve run out of ways to conjugate the word ‘hard’.

Producers of DIE HARD: YEAR ONE are touting their project as a newly coined genre: “prequel-sequel hybrid.” Their aim? Doubling down on McClane mayhem, mixing modern day John – presumably played by Bruce Willis – with flashbacks to McClane’s early days as a NYPD cop walking a beat. The concept? Audiences will get to see how John McClane became the man we met in the original Die Hard.

So… in other words, how he became an ordinary, every day smirking jamoke in the right place at the wrong time? Sounds like a real thrill ride.

Fox will be searching for a needle in a Hollywood haystack trying to find a young actor with a strong resemblance to Bruce Willis when he was a coifed cool breeze. The very best producers can hope for is some dude who can do an impression of Willis. Even then, it’ll be an uphill battle to get movie-goers into theater seats to see an imitation.

Will there be an audience eager to pay full ticket price for a film featuring a fraction of  Bruce Willis on screen that they’re used to? Unless they find the perfect ringer for their prequel McClane, this gamble will tank their longest active, most profitable franchise. Guaranteed over at the Fox lot there are plenty of bricks being shit over this risky approach.

Everyone see where I’m driving at with this prequel-sequel gambit? Good. Then lets exit the doomed Die Hard 6 highway. Time to get down to business. Let’s get into the real nitty gritty on Dirty Harry returning to the big screen.

Listen, I’m not some asshole thinking he’s the first to suggest Scott Eastwood as Dirty Harry Callahan. (For the record, there’s about a quarter-bazillion reasons for my  assholeishness. This ain’t one of them). What I am willing to wager ducets to fuck-its on is that I’m the only asshole at the table with an original script that would have both Eastwoods onscreen as Dirty Harry.

Scott Eastwood has steadily built a solid acting resume by favoring supporting roles as part of an ensemble in franchise fare like THE FATE OF THE FURIOUS and PACIFIC RIM, as well as getting other high profile gigs like SUICIDE SQUAD. In all of these movies, the up-and-coming actor downplays his striking resemblance to his Pop, preferring to blend in with his co-stars. A feat he does well. Maybe too well.

Hearing another pitch to reboot Dirty Harry probably has as much appeal to Scott Eastwood as dropping his nutsack on sizzling skillet. Here’s the thing: it’s not a fear of failure thats got the cold Dr. Scholls keeping him from stepping into his rightful place as true heir to the .44 Magnum mantle. If anything, it’s the worry he’ll nail the part too damn good and forever be pigeonholed into remakes of his old man’s movies.  If you’ve never seen Scott Eastwood toss off even a half-assed impression of Clint, it’s so spot on it’ll give you the chills.

A few years ago while on The Late Show with David Letterman, Clint Eastwood  mentioned Warner Bros. was still keen on getting him onscreen as Dirty Harry. Clint also joked if there ever was another installment, it would have to be about Callahan “chasing suspects down with his walker.” The question now becomes how to entice the elder Eastwood into brandishing the badge.

The answer, as always, is have a great screenplay. Guess what?  Just so happens yours truly can turn the ‘Dirty’ dream Warner Bros. has into a reality with a spec script utilizing the prequel-sequel concept with flashbacks providing smooth transitions for audiences to embrace Scott Eastwood as a young Harry Callahan. Far from flights of fancy for the sake of screen time, these flashbacks are integral to the plot that has Harry on his most personal case in the series.

The item most synonymous with Harry Callahan is the Smith & Wesson .44 Magnum. Some consider the pistol practically a character itself. Well that “character” turns catalyst in a plot presented perfectly in a mock-up movie poster containing the concept for what could be, nay should be, the next Dirty Harry flick.

.44 MAGNUM is a return to form as well as departure. This will be a Harry Callahan like never before. Set against a ticking clock keeping the action moving faster than maybe an aging Callahan can handle. As an actor, this gives Clint a chance to explore a side to Harry heretofore unseen: vulnerability.

In the first act we learn Callahan has been utilizing a loophole in the system to remain active on the SFPD while preparing a case against the notorious Gambino family. Word from the Captain (half Harry’s age) mentions rumors around the department suggesting Harry may be dragging his feet on sewing up the syndicate as a way to stave off his past due retirement.  Harry is also saddled with a younger male partner (always of ethnicity) and you better believe Harry takes every opportunity to bust his partner’s balls. So far, so Callahan.

A staple of the Dirty Harry movies is an early scene having Harry encounter a crime in progress. Usually a trio of punks pulling a street level armed robbery become pre-plot target practice for Harry’s .44. More often than not, it ends with Clint making a remark that becomes a call-back throughout the movie.

.44 Magnum is front loaded with a slew of staple scenes. Only this is where we flip the script. Through these early scenes a truth is revealed. Harry’s been in denial about his age not affecting his abilities. We see that he’s been masking his slowing response time from his partner. Then Callahan walks in on an armed robbery in progress at a Mom & Pop market. Expecting the next “Make my day…” moment, audiences will get something entirely different and another first for the franchise.

At a crucial moment, Harry’s age betrays him and the robbery becomes a blood bath. He’s bested by a bad guy – introduced as the leader of the trio of robbers – who will become the most formidable foe Callahan has ever encountered. This villain manages in his escape from the botched robbery to disarm Harry of his .44 Magnum in a chilling reversal of the “Do you feel lucky..?” scenario from the first film. Driven mad by personal loss suffered in the melee, the villain vows a vendetta by using Harry’s handgun to shoot innocent San Franciscans until caught or killed by Callahan.

The kick of the flick will be for audiences to watch both Eastwoods as Dirty Harry. As we watch a disgraced Callahan begin searching for the madman with a plan to take lives with his stolen .44, the trail takes him down dark routes that cause reflection on  moments from his past. While the present day Callahan attempts to recover the titular pistol, we get to discover how he first chose the hefty handgun in the first place.

The flashbacks will provide Scott Eastwood with the most natural way to assume the role of Harry Callahan. Though this device, there’s no pressure on the actor to shoulder the entire movie. It allow audiences the easy opportunity to accept Scott in the part and everyone leaves the theater grinning. With the undoubtable success, .44 Magnum will open the avenue to rebooting the Dirty Harry franchise.

Now if someone can get me Warner Bros on the horn. I’m feeling lucky.