For a while it looked as if Hollywood’s slot for “edgy New York model/artist-turned-actor/greasy bad boy” was going to edgy New York artist/greasy bad boy Vincent Gallo. Except Gallo went full weirdo. He sealed his fate writing, directing, and starring in The Brown Bunny, a 70’s throwback art house road movie which – ahem –   climaxes, shall we say, with an extended long take of almost ingenue Chloë Sevigny blowing him (some attest it was a prosthetic, not the real full Gallo).

Hollywood would have none of it. Neither would France and they have a history of adoring greasy New York bad boy actors. There’s a shitload of bad Mickey Rourke tattoos on the backs, biceps, and calves of a lot of French dudes to prove it.

That’s pretty much how we wound up with Adrien Brody. Personally, I would’ve preferred Gallo. His weirdness came from a real place. You put Vince Gallo and Crispin Glover in a movie together playing a couple of bounty hunters or buddy cops? I’m there.

Brody is Gallo-lite. Reeking of false pomp and pretentious jackholeness. A smarmy, would-be Lothario who jumps at the chance to work with the dubious likes of Roman Polanski and Woody Allen. In an flaming failure of an attempt to make himself appear more artsy than fartsy, Brody’s keen on wearing dippy hats at jaunty angles, paired occasionally with scarfs or rakish bandanas. You know that one guy who goes to study a semester abroad in France and comes back with an accent? That’s Adrien Brody. 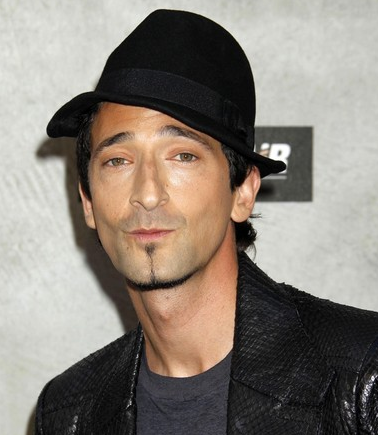 Then there was his failed foray into fashion. Brody combined his love of hats and scarfs with “man cleavage” blouses to prove there were depths of self indulgent narcissism that even Vincent Gallo would deem creepy.

Of course, what Brody is most famous for his awkward behavior at the 2003 Academy Awards when he took the stage to accept his Best Actor Oscar for The Pianist and aggressively took an unsuspecting Halle Berry into his lanky embrace for a quick game of tonsil hockey. Brody describes it as an “out of body experience.” There were some attendees in the front row that describe it as “stomach churning.”

Halle Berry, presenting because of her Best Actress win the year previous, played it off with the laugh of a good sport. Naturally for the first six months to a year afterwards, every hack journalist and gossip slinger was asking her about “the kiss.” Berry, wanting to be a sweetheart, maintained a upbeat response.

Cut to: present day, 2017. Last August to be exact. Halle Berry, ever still the sweetheart, gave a more candid response to a viewer call-in question while on Watch What Happens Live with Andy Cohen. Check out Ms. Berry’s response when asked what was going through her head when Brody decided to have his way with her.

Can you imagine, in today’s landscape where the outrage addicted pounce on the slightest egrigious action of anyone in the public eye, their reaction to Brody’s wannabe Valentino act? Based on the uproar calling for the head of who was responsible for handing Warren Beatty the wrong envelope for the 2017 Best Picture winner, my guess is the outraged would’ve swarmed the stage like it was 28 Days Later. Adrien Brody would still be the youngest male to win the Best Actor award, he would just also be known as the first Best Actor to be literally ripped apart onstage by a bloodthirsty, outraged mob.  That would’ve been the greatest Oscars ever.

The best example for why Brody earned his spot on this illustrious list can be traced to his 2003 appearance on Saturday Night Live. Apparently Brody had been carrying around in his actor’s back pocket, a Rastafarian character and wanted SNL writers to come up with a sketch that featured his Rasta man. Boss man Lorne Michaels nixed the idea. So in a huge “fuck you” to Lorne Michaels, Brody did a quick change into his Rasta man outfit moments before taking the side stage and introducing the musical act as the Rasta character. For this, Brody was banned from SNL.

While that may seem harsh for some, allow me to put it into perspective. SNL has the appearance of a loose, improvised sketch show. The genius of Lorne Michaels is that behind that appearance, the show is a well oiled precision engine. Not a minute or second is to be wasted. The spots where the host gives an introduction of the musical act is basically the host saying, “Ladies and gentleman…” and the band’s name. Between that line and either a camera pan or transition, it’s ten seconds max. Brody’s Rasta man act takes 4 times that. So not only was it a “fuck you” to Lorne Michaels, it was also a big, self indulgent “fuck you” to the cast and crew.

NBC has scrubbed the clip of this stunt from YouTube. It’s not on their SNL website. The episode doesn’t get shown in reruns. NBC has made it very hard to view the clip.

Not hard enough for Tinseltown Takedown to score a copy. I should warn you, when your ears hear what your eyes are about to see, they may never be friends again.

I think Lorne Michaels was trying to save Adrien Brody the embarrassment of having his Oscar revoked. This would’ve been justified throwing off the SNL mechanism if the Rasta man was on the level of Gary Oldman in True Romance. But it’s not. Whoever told Brody this was a spot on impression of a Rasta man should really be ashamed of themselves for enabling this hack job. His jokes suck, his accent is childish, and his posturing is all cliché stereotype hype. It’s like watching one of your drunk buddies put on a rasta dredlock hat and babbling nonsense in the kitchen until passing out.

Luckily for Brody, social media wasn’t the monster it is today. Had it been? Trust, quicker than you can say “whitewashing” the outrage addicted would’ve been all over him like a hobo on a ham sandwich. Chances are Adrien Brody would’ve wound up with his severed head on pike, wearing one of his dippy hats at a jaunty angle.